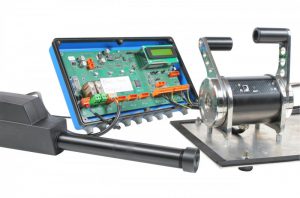 Hydronautica, an internationally active company, concentrates mainly on electronic control or control of drive systems for commercial and pleasure craft.

Hydronautica is at the forefront of the development of highly advanced systems for the control of ships in commercial and pleasure craft. Brunelco has developed systems for Hydronautica that allow ships to be controlled electronically. In addition, it is possible to control the drives completely wirelessly, thus creating the possibility to position the ship and to moor it easily.

Unique to the concept is that the control levers do not use potmeters that have to give the command for forward or backward or to adjust the speed. This is in contrast to many other systems on the market. Potmeters are very sensitive to moisture and wear and therefore less suitable for applications on ships.

Together with Hydronautica, a non-contact electronic goniometer has been developed, a unique instrument because the lack of contacts means that it is not sensitive to moisture.

The housing is made of polystyrene and designed in such a way that it complies with insulation class IP65, so completely waterproof!

Every electronic system on board of a ship is dependent on power supply, including EMC. However, in order to increase reliability, a standard provision has been included so that the system can be powered from two power groups, for example from the starter batteries and the mains batteries, where the system switches imperceptibly if one of the power sources fails.

The system could not be inferior to the rest of the ship. For this reason, we have opted for high-quality materials that do not suffer from the various weather influences and have a “rich” appearance. The system is designed according to the CE guidelines.

With the EMC, Hydronautica offers an advanced engine control system that stands out in terms of quality, appearance and ease of operation. With EMC, you can control the motorisation of your ship with your fingertips. EMC can be installed itself and distinguishes itself because it can be used in the basic configuration for almost all types of marine engines. This makes EMC a unique and universally applicable system.

The EMC has become a fully electronic motor control system that controls all components integrated in the powertrain. This has a number of advantages:

Interference- and maintenance-sensitive push-pull cables are a thing of the past;

All parts of the powertrain are controlled in such a way that the mechanical load when changing the direction of rotation of the powertrain is reduced to a minimum: the motor speeds are first reduced before the gearboxes are changed;

Non-contact angle gauges are used to read out the position of the EMC throttle lever: no interference or wear and tear! In addition, the system can be powered by two power groups, which improves reliability;

Connection to other intelligent control components is now possible.