This may be too inaccurate for fieldwork. On the other side of the scale there are rtk-DGPS’s, which, with the help of a fixed station, can work to the nearest centimetre.

Reference receivers are placed all over the world and transmit a modulated correction signal to the 283.5 to 325 kHz band over the radio beacons of sea and coastal shipping. The correction signals can be identified by a unique identification number that is sent with the corrections. The International Association of Lighthouse Authorities (IALA) is the organisation that takes care of the worldwide chain of MF radio beacons. 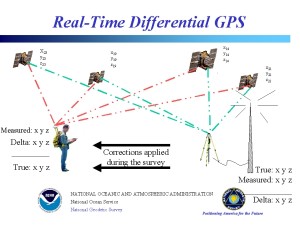