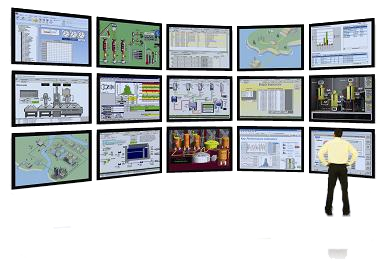 In consultation with you, we will discuss your wishes, which will form the basis for the design.

In industrial systems, a user environment is usually called an HMI system, which is an abbreviation of human-machine interface. An HMI system often consists of a touch screen with built-in processor, memory and communication cards. The interface makes it easier for the human operator to see data (visualisation), to influence these systems (control) and to display alarms. Supervisory control and data acquisition (SCADA) software is often used for the interface.

The user environment allows the operator to turn the machine, or parts of it, on or off, or to adjust speed settings. In addition to control, the operator can also be informed of any alarms. This happens when a system or parameter to be followed, in spite of the automatic controls, exceeds its pre-defined permitted space. The operator can then intervene via the user interface to stabilise the process and, if necessary, re-adjust it.

An industrial system user environment usually also includes a trend module. This module tracks the history of certain variables and displays it in a graph or table. This allows an operator to monitor the process better and to trace what went wrong after a failure.