Moving drilling rigs, salvaging a Russian nuclear submarine such as the Kursk, raising the mega Ferris wheel ‘London Eye’… former director of Hydrospex, Tjerko Jurgens sums up his successes simply as: “Together with my team, I was the inventor of solutions for extremely heavy transport. And that was always achieved by combining our ‘stupid power’ with intelligent operating systems from Brunelco Electronic Innovators. That collaboration started 20 years ago. And I can say, nowhere in the world have I come across a potential partner who could have done better than Han Brunnekreeft.” Enerpac Integrated Solutions, the company Hydrospex, has since bought from Jurgens. The other Enerpac locations around the world are happy to continue their collaboration with Brunelco from Haaksbergen. “That means something”, Jurgens emphasises. 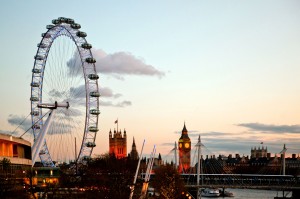 Tjerko Jurgens rarely gives interviews. I am and remain enterprising”, his business card now says “Shining Star Holding”, “but nowadays I focus mainly on another side of life.” He points to the horse boarding school that he runs with his wife and children. It borders on his striking and spacious study, where the props from his ‘previous life’ are still clearly displayed. “After a time of long days of work and hard work, now is the time for me to focus more on my family. That’s something that’s been overlooked in recent years.”

“I like to look back on a fantastic collaboration with Han Brunnekreeft and his company Brunelco. Since the early years of our companies, I have known Han. We have developed a lot together, we have overcome great challenges and we have grown together. What immediately appealed to me in the cooperation with Han was his flexibility and his empathy for mechanical engineering. That’s something you seldom see with electrical engineers. But that meant that we understood each other quickly when it came to control issues.”

Jurgens has always experienced Brunelco’s products as very reliable. “Important for Hydrospex”, Jurgens emphasises. “We used to do some dangerous work. Think of the salvage of nuclear installations, often deep under water. You don’t want any malfunctioning or fault-sensitive electronics. What we were looking for was a modular control system that could still be delivered or re-delivered in 20 or 30 years. An open and freely programmable control system in which we can easily make adjustments ourselves. It was developed by Brunelco in 1996 and to this day they still use it in its unaltered form. So systems they delivered 15 years ago are still expanding on the basis of the same components. You can forget that in the traditional PLC world.”

According to Tjerko Jurgens, custom systems, such as those made for Hydrospex at the time, are not developed by large electronics companies. “After all, they look first and foremost at their market (large numbers) and at the cost price. In both respects, we were no match for them. Because we didn’t need large numbers, but we really wanted the best and most reliable components. No matter how crazy it may sound, in practice it has been proven on several occasions that we were never really more expensive compared to the price for standard PLC technology.”

There are advantages and disadvantages to custom designed hardware. A disadvantage for Jurgens is that you marry your supplier, which is not easy to get rid of. “But the big advantage is that your customer – with you as a system supplier – actually makes the same commitment. Tjerko Jurgens laughs provocatively: “Our marriage to Brunelco has always worked well in practice. Call me a second company that can say that they’ve been doing business with the same supplier for 16 years without interruption! Despite the fact that competitors came knocking on the door of our customers, who all use Brunelco electronics, we couldn’t get rid of them. The competitor’s system could not communicate with what we delivered there. An additional, nice advantage of working with Brunelco. What’s more, it’s easier to maintain a marriage with one supplier than with 3 to 500 customers.”

According to Jurgens, it is also common for electronics specialists not to be able to separate development costs from manufacturing costs. “Of course, the first version of a completely new product is the most expensive. The design, implementation, further development and testing costs a lot of time and money. But with Brunelco, I have always been able to make good agreements about this. On the one hand about the price for development, and then a realistic price for the execution of repeat orders. We often supplied our customers with the steel structures and hydraulics, while Brunelco provided intelligent electronics solutions. The management of Enerpac asked me during the takeover procedure of Hydrospex why I deposited everything in the field of electrical engineering with Brunelco Electronic Innovators. It was considered dangerous. However, I found it much more dangerous to work with multiple suppliers, each with their own vision!” Jurgens nods happily. “They are now convinced of the expertise of this company. Brunelco is still developing the necessary controls in the form of printed circuit boards. Always of excellent quality and always with accompanying software. By sharing knowledge, Brunelco, but now also Enerpac, has the know-how in this area. So we both have an interest in this partnership, so a good cooperation.”

Would you like to know more about solutions that Brunelco can develop for you?
Mail or call +31 (0) 53 573 11 00. A no-obligation appointment is easily made