Enerpac, internationally active and specialist in heavy lifting applications, has been using Brunelco embedded controllers for almost 20 years for the Heavy lifting control of hydraulic cylinders. We want to keep it that way, so we have decided to modernize the solution so that it will last for at least 15 years

Due to the enormous growth of Enerpac, the installation time has become increasingly important. Hence the desire to make the installation of the control system even easier and to minimize the required space.

The choice was made for a compact housing that can be mounted on a DIN-rail. By using modern electronics, the functionality of the new SCC Compact has been expanded at the same time, both in terms of hardware and software. 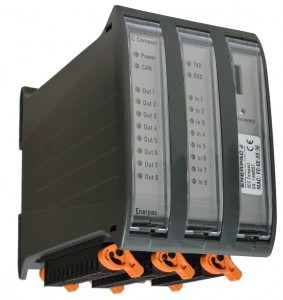 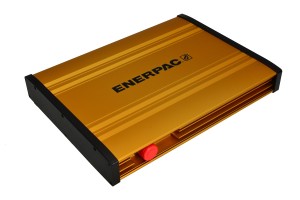 Prior to a thorough inventory of the technical possibilities and the wishes of our client, we developed the SCC Compact. The concept is fully in line with existing versions of the smart cylinder control system, so that existing application software can be used. This development extends the life cycle of the SCC concept by at least 15 years!

The SCC Compact is supplied in a housing that is suitable for DIN rail mounting. The SCC Compact is also equipped with an integrated CAN-bus interface, so that the amount of IO per node is easily scalable. LEDs for all digital inputs and outputs show the status at a glance, which simplifies troubleshooting in the installation. The status of the CAN and isolated RS485 bus can also be viewed there. The connectors for all digital and analogue inputs and outputs, power supply and RS485 bus are placed on one side to make it easy to create a wiring harness.

The SCC Compact uses a modern microcontroller with a 32-bit ARM Cortex-M core. An important new feature is updating the software via the RS485 network. Controls that require an update or special software can thus be easily realized. The installer can update all SCC Compact modules connected to the RS485 network via the website of an embedded web server at the push of a button; a simple and fast procedure.

Thanks to the SCC Compact, the existing operating system will be completely in line with our customer’s modern installations; a compact and flexible platform.

Because of the many successful projects based on the SCC concept, this controller is increasingly being used for other applications. As a result, the demand for scalability of the number of IO functions per node is increasing. To meet this demand, a number of expansion modules have been developed that can be used in combination with the SCC system. By using an upright housing, the required surface area in the installation box is minimal.

The expansion modules are housed in a similar housing to the SCC Compact, which makes it easy to mount these modules on a DIN rail. Furthermore, the modules are equipped with a CAN bus and local intelligence. The CAN bus provides a very fast response of the IO module, while the local intelligence is built in to guarantee safety and a very easy installation.

All extenders communicate with each other and with the SCC Compact via a CAN interface. In order to be able to connect easily, each extender is equipped with two standardized RJ45 CAN connections. This means that the installation of cables takes almost no time at all. Each type of extender uses the same modern 32-bit ARM Cortex-M core microcontroller. As a result, the basis of the software is the same for every type of extender. Then, on top of this base, the extender specific software was built. The status of the module is displayed by means of LEDs which are placed on the front of the module.