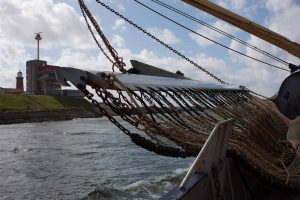 Problem definition
In order to catch the fish hiding in the seabed, chains were dragged over the seabed. This still results in damage to the seabed and high fuel consumption. This gave rise to the idea of electric fishing: by sending out pulses of voltage above the seabed, the fish are chased from the seabed and then caught in the trawl. HFK Engineering asked Brunelco to develop a module that uses electrodes to generate these voltage pulses.

The solution:
Several copies of the module developed by Brunelco will be assembled per Pulswing. Each module controls an electrode. The supply voltage for the modules is supplied from the ship with a long cable. 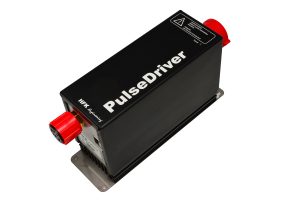 The Brunelco pulse module has made the Pulswing operationally applicable with the above-mentioned advantages. An additional advantage of the pulse module is that discards (fish that one does not want to catch like other species or young fish) decrease considerably, which ultimately benefits the fish stock. This makes it possible to fish more selectively for both species and size.

Important principles in the design:
The design had to take into account the regulations laid down by the Ministry of Agriculture and Fisheries. In particular, the voltage levels on the electrodes, as well as the limitation in the supplied energy of the pulses, were critical factors. Partly due to the intensive cooperation with HFK Engineering and the possibilities offered to carry out tests at sea, the results are very positive.

Pulswing in practice
Pulswing has already been commercially released and the media has also paid attention to this.